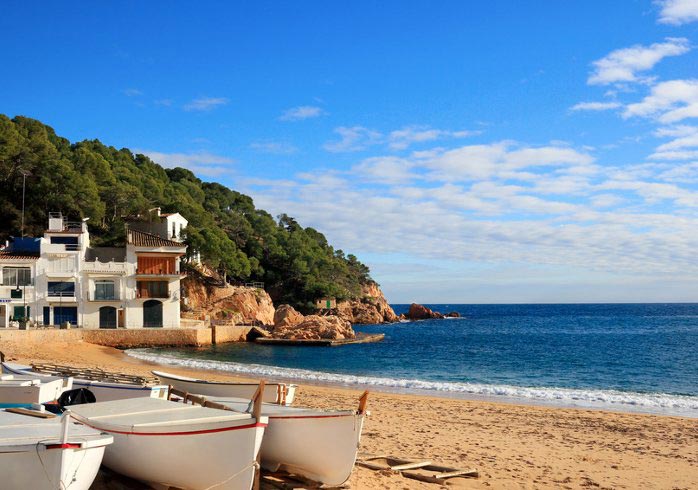 The coast lines of Costa Brava and Costa Blanca very much entice with their great diversity and numerous beaches. A holiday house at the sea in Spain or a holiday apartment with sea view in one of the well known coastal regions is an attractive preposition for families, couples as well as adolescents and children. In Spain you are able to find everything for a wonderful beach vacation. Long sandy beaches, children playing under the splendorous blue skies and adults taking time out from the everyday strain and stresses under the delightful sunshine. Cooling off in the sea, an ice cream from the nearby kiosk or sunbathe on a comfortable sun lounger. A number of beaches have been awarded the blue flag which is a seal of approval and indicates that the water is particularly clean and checked yearly.

A welcome diversion is provided by the varied cultural life of Spain. Equally party enthusiasts and revellers will not be disappointed. The discos open after midnight and close in the early morning hours. Here one kicks off the evening with a delightful meal or a sociable visit to a bar before one transforms the night to day.

Should one prefer peace and relaxation it is recommended to travel around springtime or autumn. There are many coastal strips that are empty around this period and the temperatures are lower compared to the hot summer time. 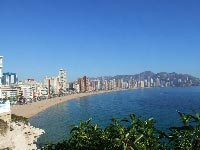 Due to the ragged coast as well as lively structured landscape that is overgrown with pine forests this part of the coastline is referred to as the “wild coast”. One could though also think that the name is a clue to the nightlife of this region...

One of the largest bathing resorts along the Costa Brava is Lloret de Mar with a coastline of around 7 kilometres. Lloret de Mar though has more to offer than just beaches and sun as the town has a rich cultural heritage with castles from the Middle Age and Iberian settlements.

The nice and an attractive resort Empuriabrava was established at the Muga Delta. Here one can find an extensive network of canals and hundreds of whitewashed holiday properties with private landing stages.

Regardless whether you only intend to stay at the Costa Brava for a couple of days or planning a longer vacation one should not miss out visiting the rocky bays of Begur and Palafrugell that gave Costa Brava their name. Also worth a visit are the fish markets in Blanes and Roses. The Costa Brava experience is dominated by sun bathing on the beach but those seeking sport activities will also find the region to their liking. Nearly all resorts provide windsurfing, water ski and sailing courses. Those who want to take it easier may consider renting a paddleboat or canoe.
Should you seek to get away from the hustle and bustle of the coastal resorts then cool off in the oak forests which are situated away from the coast and waiting to be explored. The area of Sant Pere Pescador provides visitors with a spectacular nature experience. The nature reserve Aiguamolls de L’Emporda with coastal lagoons, salt areas and dunes are not only a nesting site for many water birds but are also of great importance to the fruit growing sector. You may like to go on a quad tour and take in the delightful landscape. Of course nature conservation is an absolute priority.

The “white coast” owes its name to the traditional white washed houses found in this region. Equally though the long white sandy beaches are a feature of Costa Blanca.
Probably one of the most well known towns is Benidorm also referred to as Spain’s Manhattan. Enticed by the extensive bays and sheer endless overtures to revellers the place welcomes around 4 million tourists each year. Also a very popular resort is Calpe that is situated at the sea near a steep volcano rock. In this region you will be able to choose from more than 500 holiday accommodations on atraveo.
Many towns and villages have sought to retain their typical traditional character like Denia a town full of vitality and colour. On a hill one is able to find the ruins of a castle from where one also has a fantastic view over the town and marina. A small fishing village fits into the picturesque setting of the town. The caught crawfish are appreciated beyond the boundaries of this city.
Particularly interesting day trip would be the park El Palmeral in Elche that has more than 200.000 palm trees which is the largest palm garden in the world. The palm trees blend in perfectly with the townscape of Elche that from afar you may think it is a forest.
We would like to recommend for a varied and exciting day trip for the family the theme park Terra Mitica in Benidorm. Terra Mitica is the largest amusement park along the Costa Blanca and is divided into subject areas Egypt, Rome, Greece, Iberia and the Islands. The highlight of the park is the huge wooden roller coaster “Magnus Colossus” with a length of 1 kilometre. It is the largest roller coaster in the Mediterranean. Those who do not have a head for heights can visit the Roman stunt show with horse races and gladiators in the large open air area of the park.

Blogs sorted according to topics